One of the great things about Bath is that you can watch a Jane Austen drama being filmed in the morning, stroll among elegant buildings and actors in Regency costume, and then enjoy an outdoor lunch and a walk in the countryside in the afternoon. 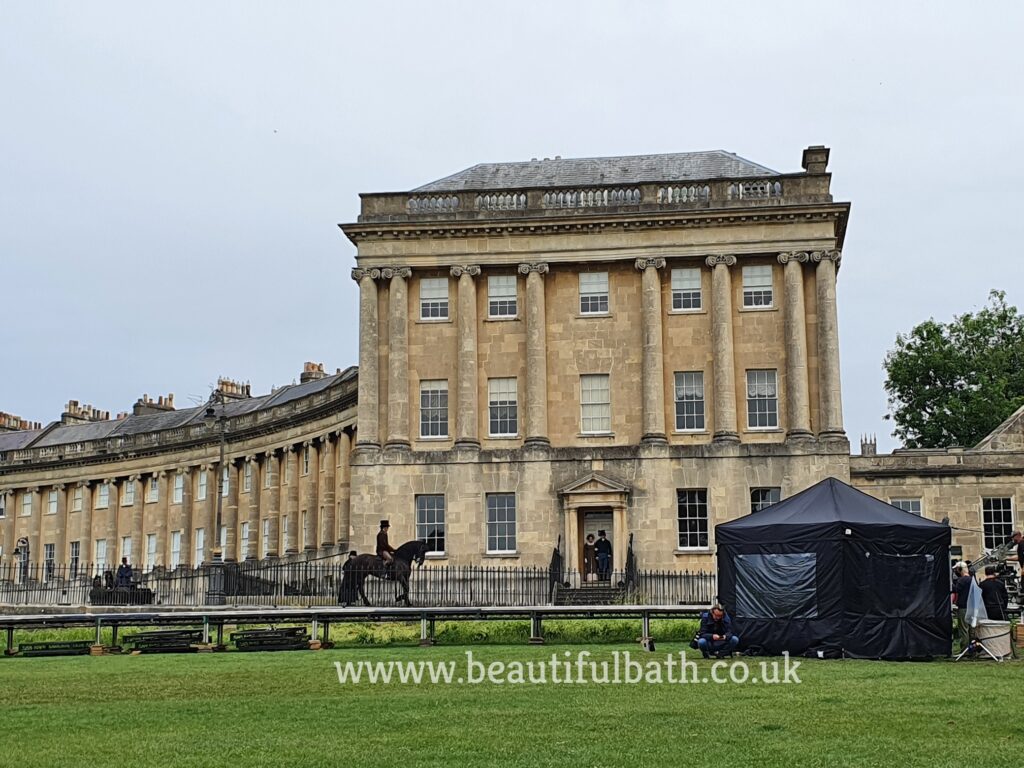 A horseman on the Royal Crescent

When we saw road closure signs for two of Bath’s top filming locations this week, we thought that maybe Bridgerton was back in town – the locations were two of those used frequently in Bridgerton Series 1 (as well as lots of other films). But news got out that this filming was to be for a new Netflix adaptation of Jane Austen’s Persuasion, many people’s favourite novel by the author. Starring Dakota Johnson as heroine Anne Elliot and with confirmation of a ‘modern, witty approach’ and ‘colour-blind casting’, this sounds like a very post-Bridgerton movie.

The Persuasion cast and crew were in Bath filming yesterday and today, and I went to have a look. Yesterday morning, filming was on Bath Street, a grand colonnaded street next to the local branch of Primark. Some of the Primark windows now contained wigs and Georgian-era fashion accessories (more photos at the foot of the page for fans of props and details). Extras in elegant Regency outfits waited by this pop-up historic haberdasher-milliner; a man in breeches walked past with a tray of coffees, and horses waited down side streets. 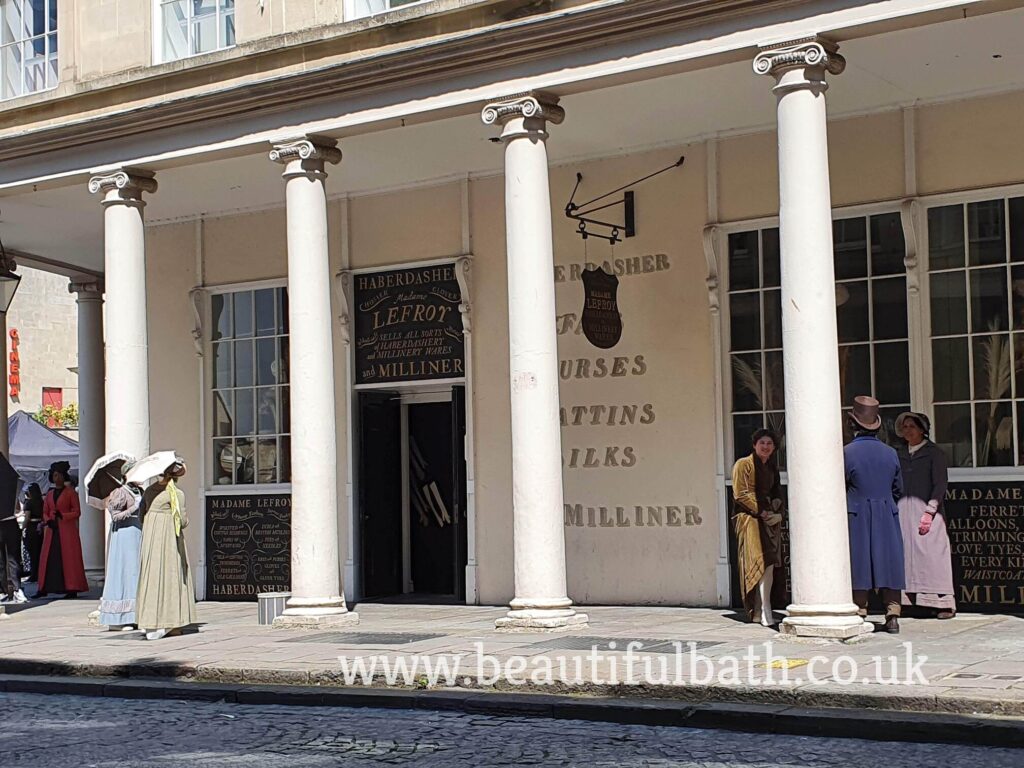 In between takes on Bath Street 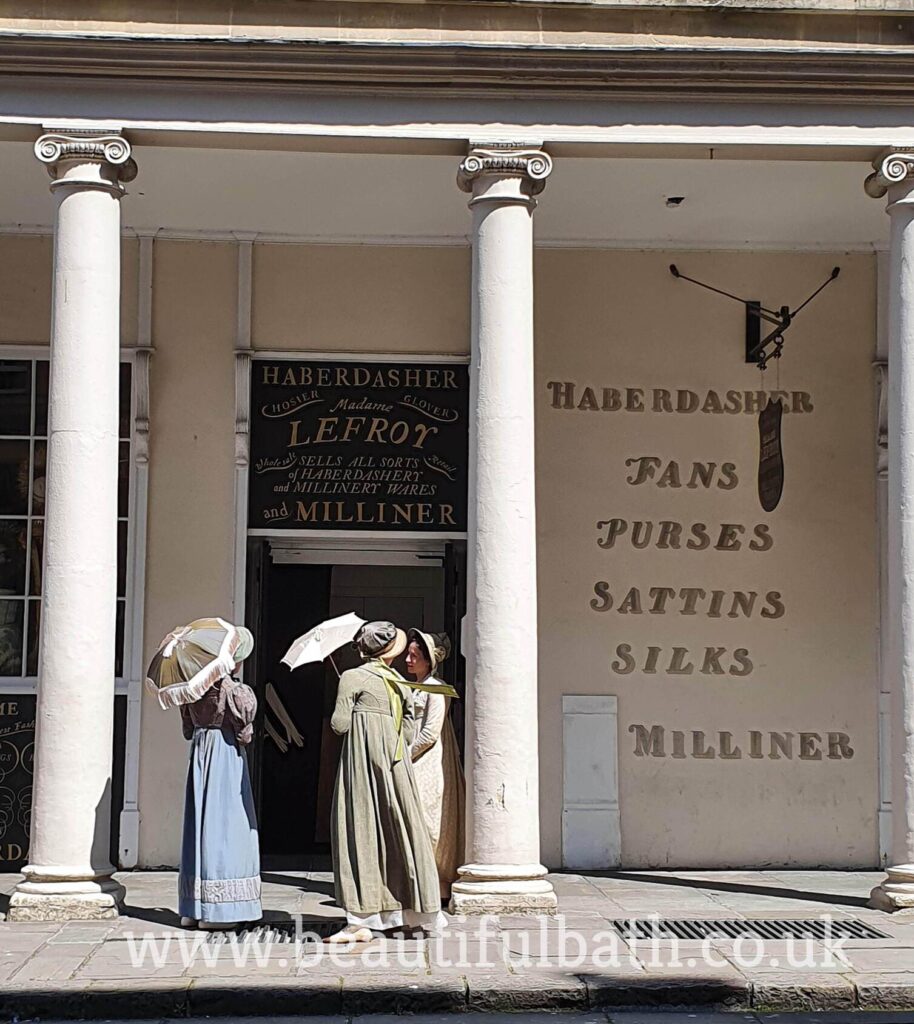 Elegant ladies outside the haberdasher (aka Primark)

At their cue, the costumed actors promenaded along, chatting, carrying hatboxes, and generally bringing Bath back to life as it would have been two hundred years ago. A carriage clattered past the Cross Bath building (part of Bath’s historic spa complex). It seemed that a scene involving the characters was taking place by the carriage – our view was mainly of the background activity. 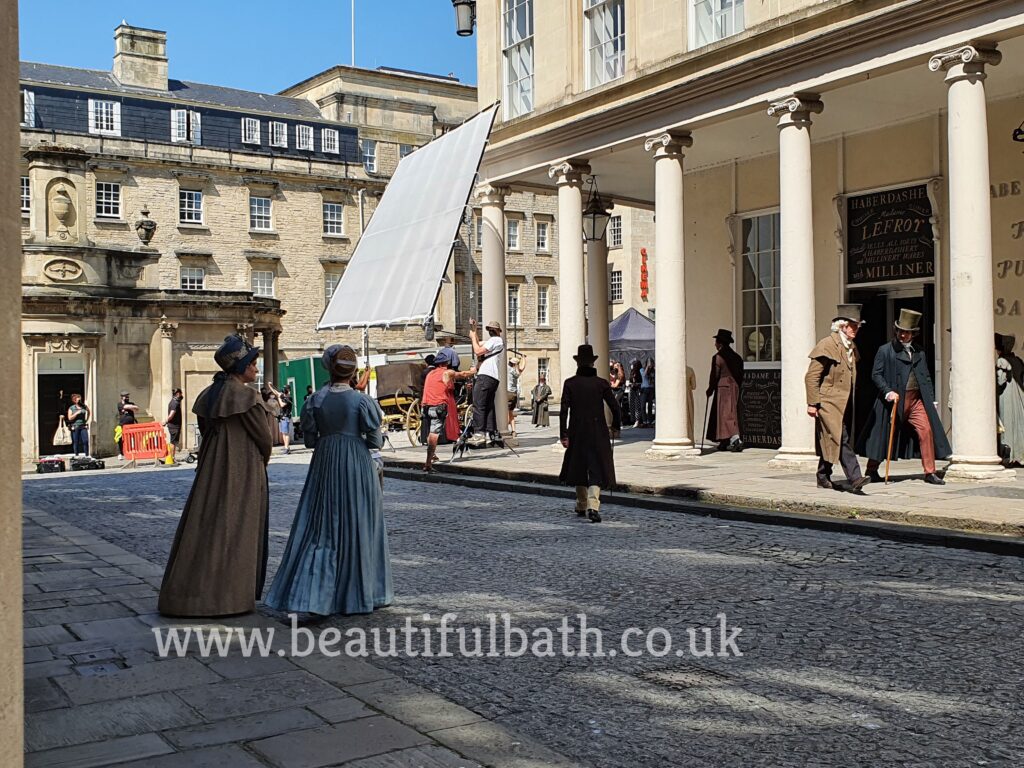 Later yesterday, filming was taking place in the screened-off Gravel Walk, a pedestrian route between Queen Square and the Royal Crescent, invisible to the public, though loud voices were audible as we passed nearby. I included this path as part of my Bridgerton walking tour, as I really like the ambience of the route, which runs along behind the garden walls of Bath’s grandest houses, and gives access into a restored historic garden. It’s not such an obvious filming location, generally speaking, but in Persuasion Austen mentions the Gravel Walk as a backdrop at a key point in the novel, and I’m looking forward to seeing how it is used on screen.

When I arrived in the town centre this morning, those two filming locations were returning to normality, and Primark advertising had reappeared alongside the temporary haberdasher signs. Today’s action was up on the Royal Crescent, Bath’s biggest location of all. Yesterday there was prep work taking place, and I saw a crew member taping cardboard over evidence of the modern world: a burglar alarm.

Over an hour or so this morning I watched a single scene being shot, several times and from different angles and in close-up. The public were welcome to watch from the park nearby, keeping beyond a cordon, or from the end of the closed-off street. In between takes, passers-by were allowed to walk along the street, past carriages and actors. 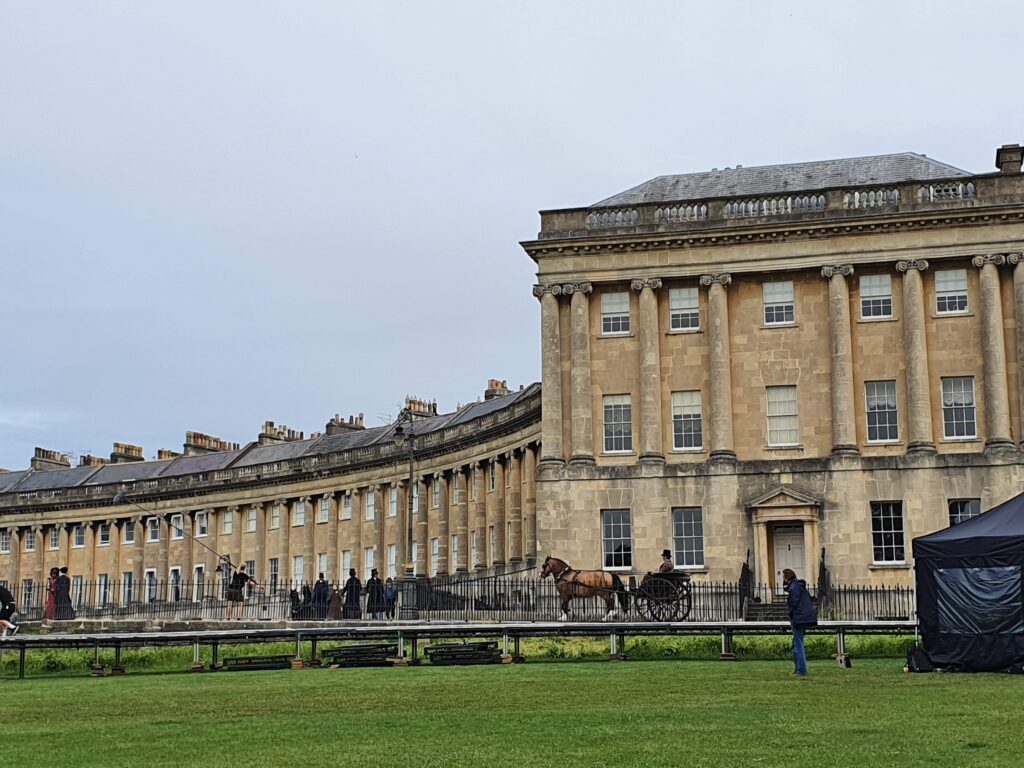 Royal Crescent during filming for Persuasion

The scene consisted of carriages, horse-riders and pedestrians passing along in front of No. 1 Royal Crescent, while two female principal characters walked slowly up to the railings in front of the Crescent, engaged in what seemed to be a serious heart-to-heart. This appeared to be a scene between Anne, in dark colours, and her friend/mentor Lady Russell (who is played by Nikki Amuka-Bird), perhaps discussing love interest Captain Wentworth. Her companion in a gorgeous red gown then moved away, leaving ‘Anne’ to look out over the wrought-iron fence, apparently downhearted (from where we were, anyway), and then walk back trailing her hand along the railings despondently. 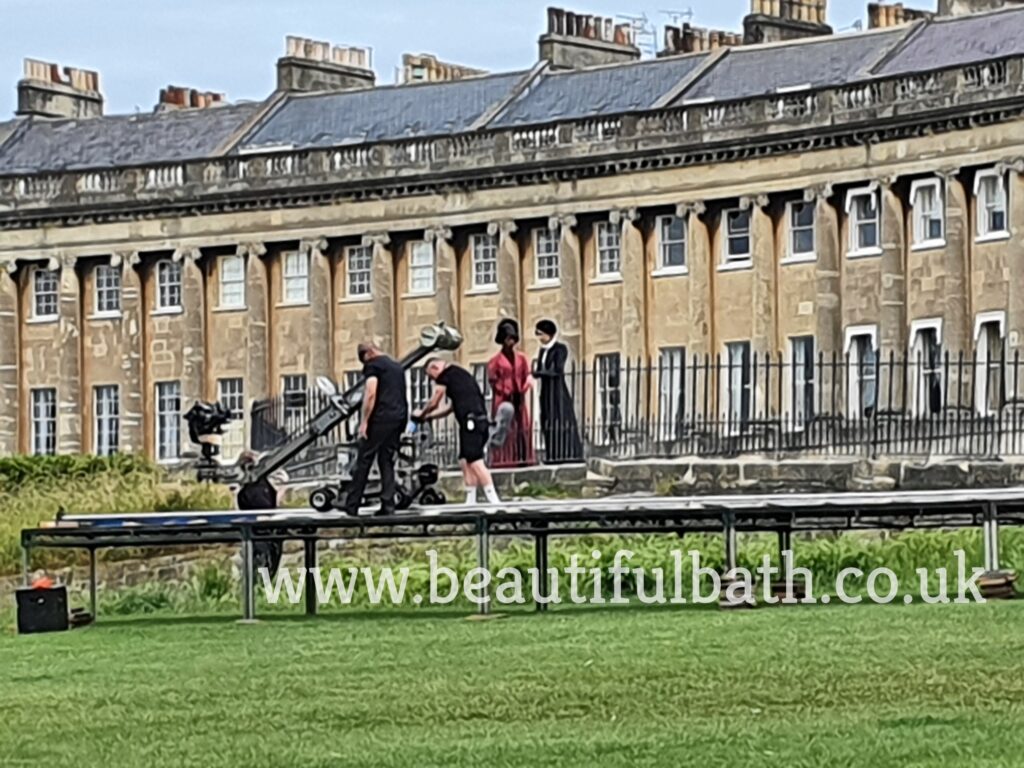 A heart to heart in front of the Royal Crescent 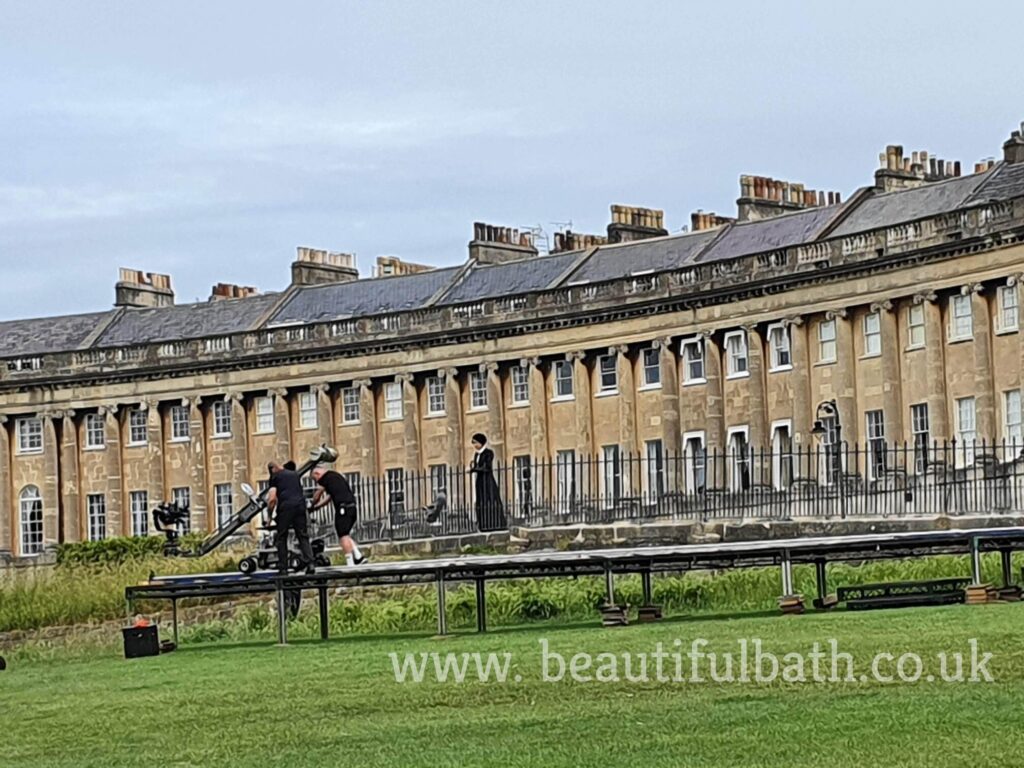 As well as seeing a bit of a favourite novel brought to life, it was good fun to see horses and carriages evoking Bath’s glory days. The Royal Crescent is very attractive with no parked cars, and the horses and grooms waiting around were a great bonus – like a tiny snapshot of Bath in the 18th and 19th centuries. And the costumes, of course, were gorgeous. 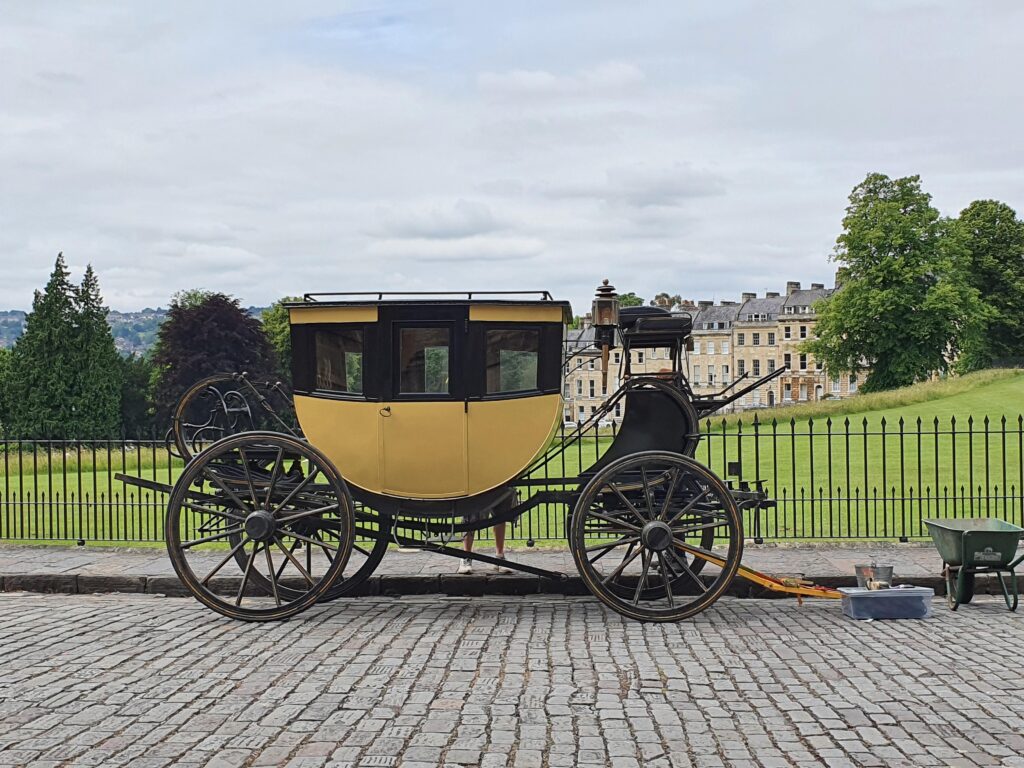 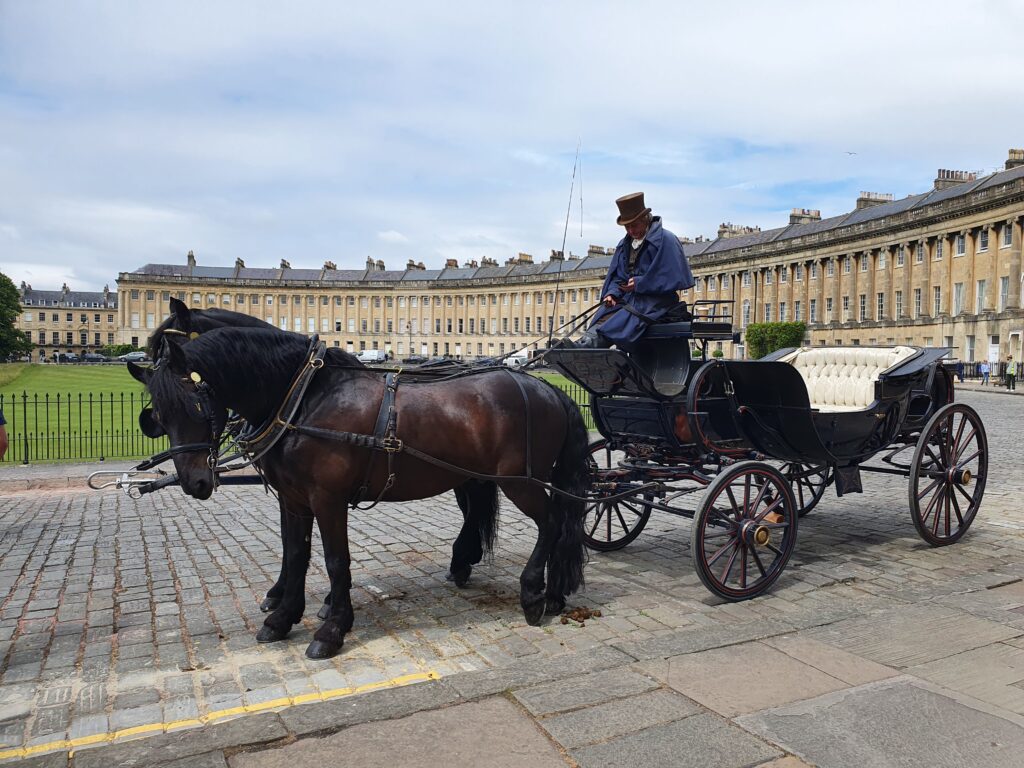 Little tents were set up between the Gravel Walk and the Royal Crescent where extras waited, looking hot in their costumes, and had their make up touched up. Some tourists and locals, walking through, were slow to notice the historic costumes and film crew around them: ‘Oh my God! We’re on a film set!’ I heard one woman shriek after passing about 15 Regency-costumed actors. 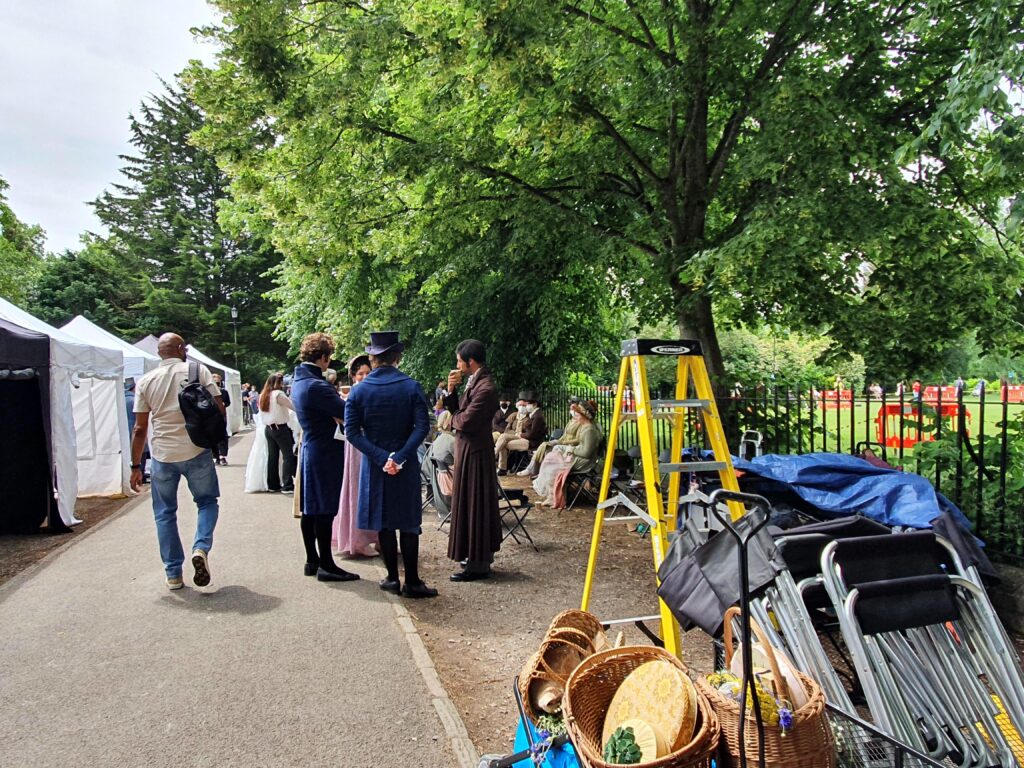 My favourite production of Persuasion (so far) is the BBC’s 1995 adaptation with Amanda Root and Ciarán Hinds – I’d really recommend watching this if you like the book, and while you wait for the Netflix movie to be released. There’s another adaptation from 2007 which has some good points – Rupert Penry Jones is a good sensitive Captain Wentworth (my only reservation is that perhaps he is just too handsome for the Captain) – but I don’t personally like the characterisation of Anne in this one.

And of course the novel itself is masterly. If you’ve read it once, and been unsure, it’s worth returning to. I find new things in it each time I read it, and appreciate it far more than I did when I was younger. Many of Anne’s trials are so very relatable – I particularly love the excruciatingness of her experience at a concert where social rules, mischance and misunderstandings prevent her from resolving problems with a conversation. So many of the themes, and human nature, are timeless. 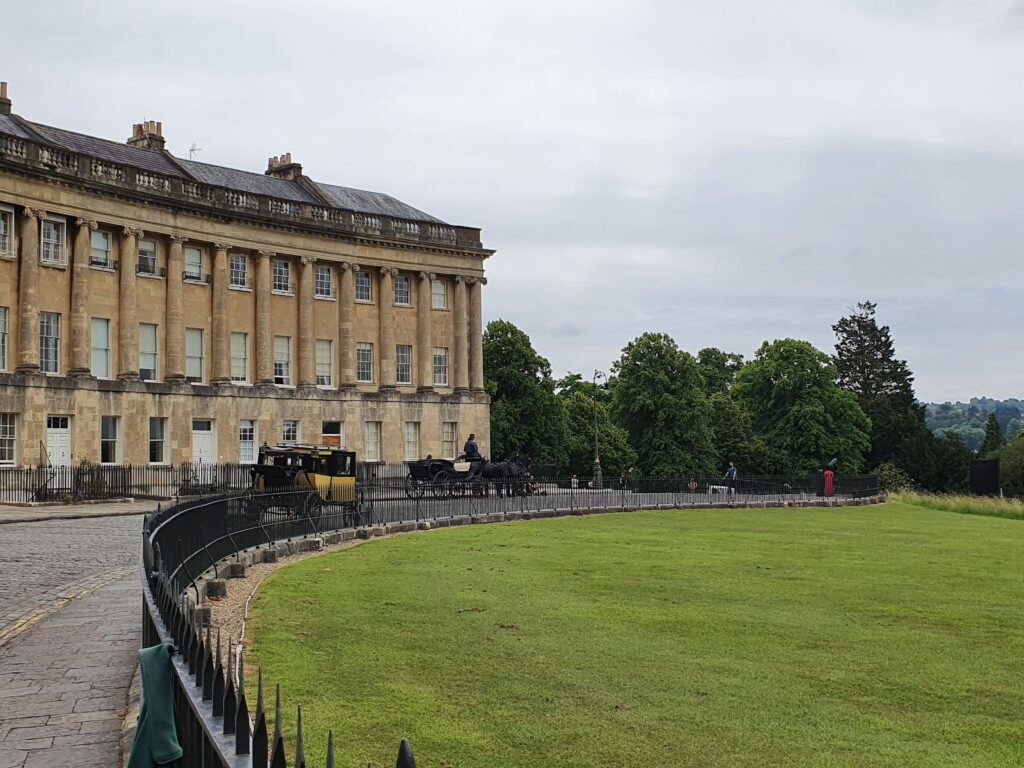 View from the Royal Crescent 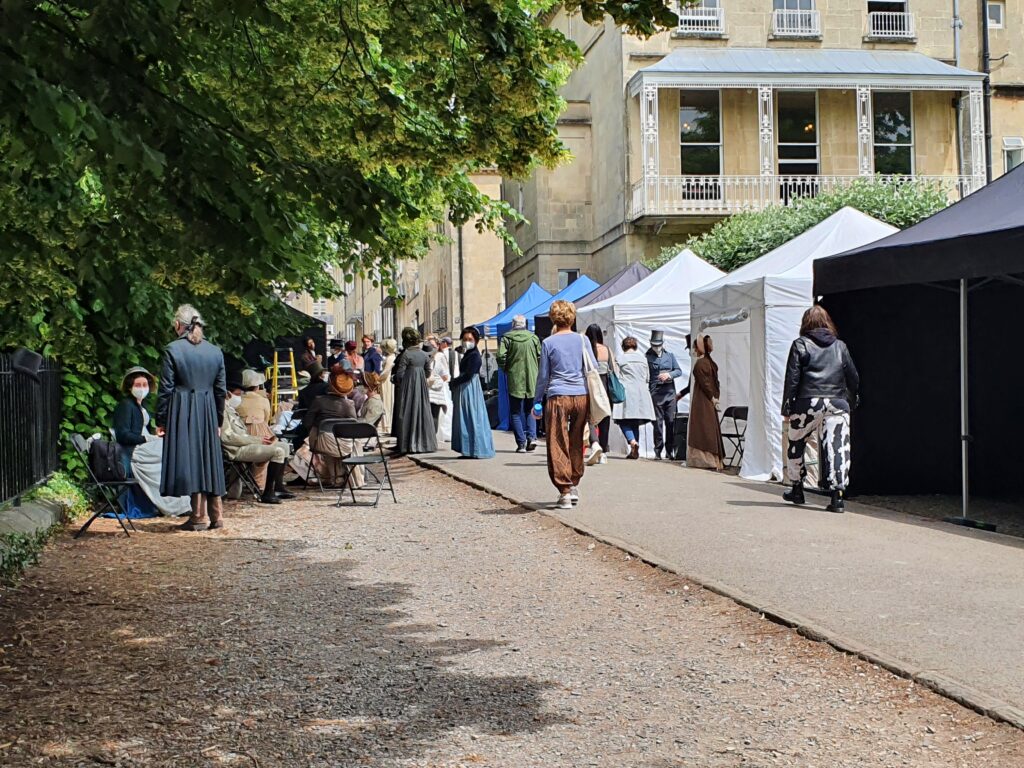 Tents for crew and actors 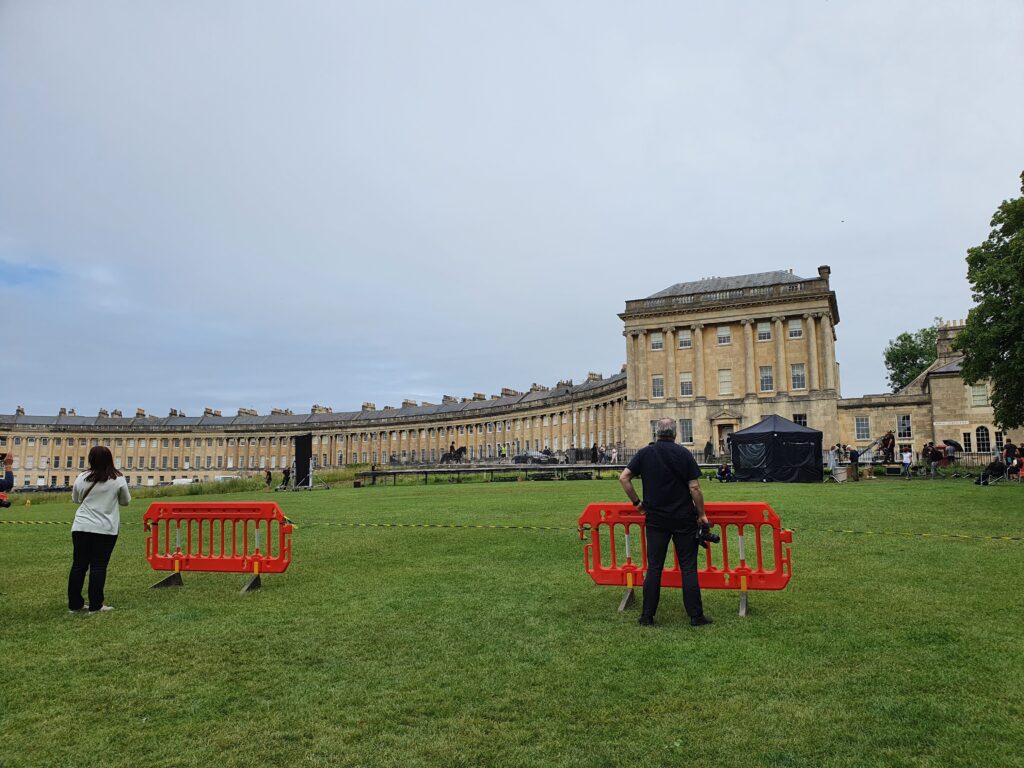 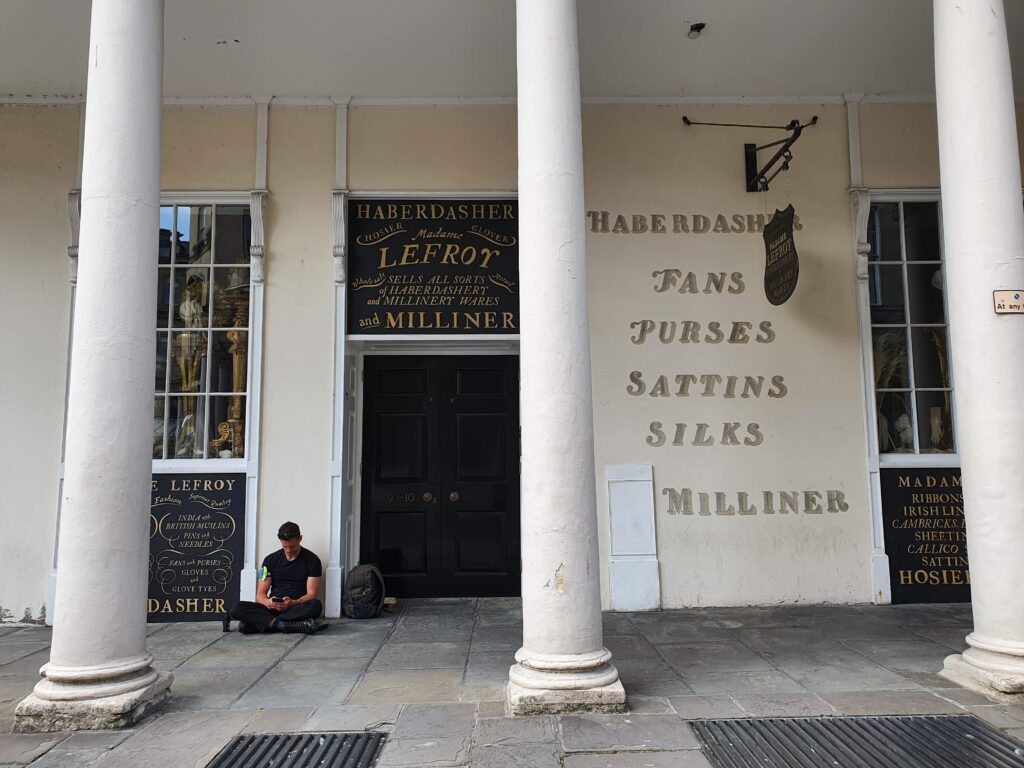 Detail of the on-street set in Bath 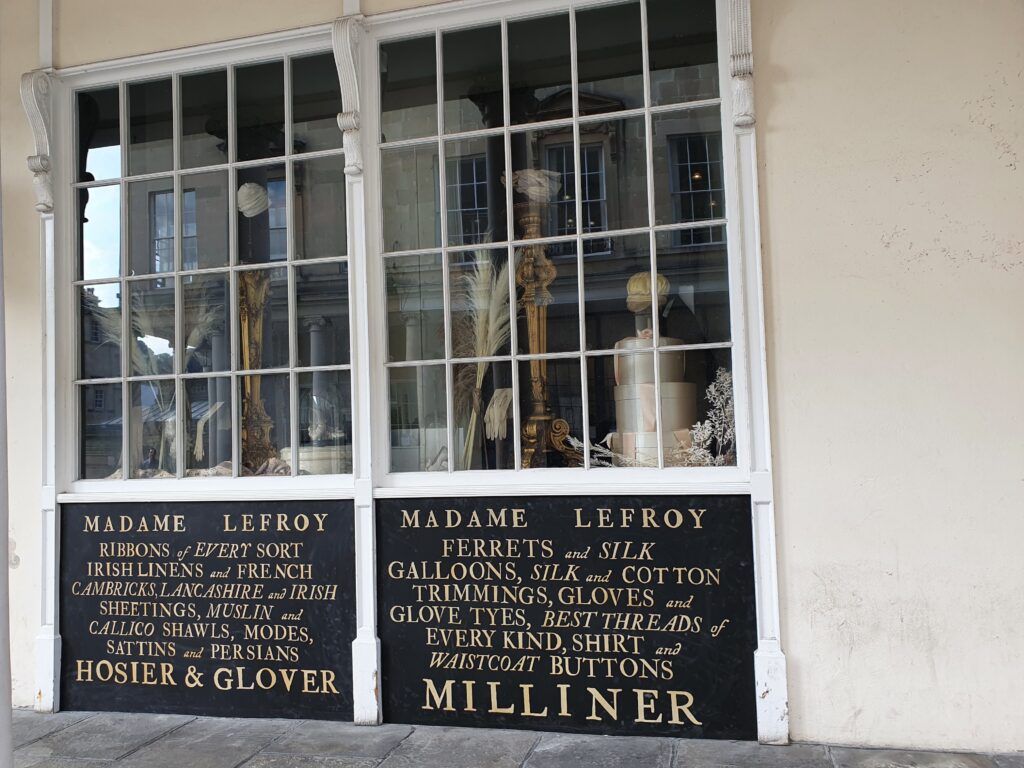 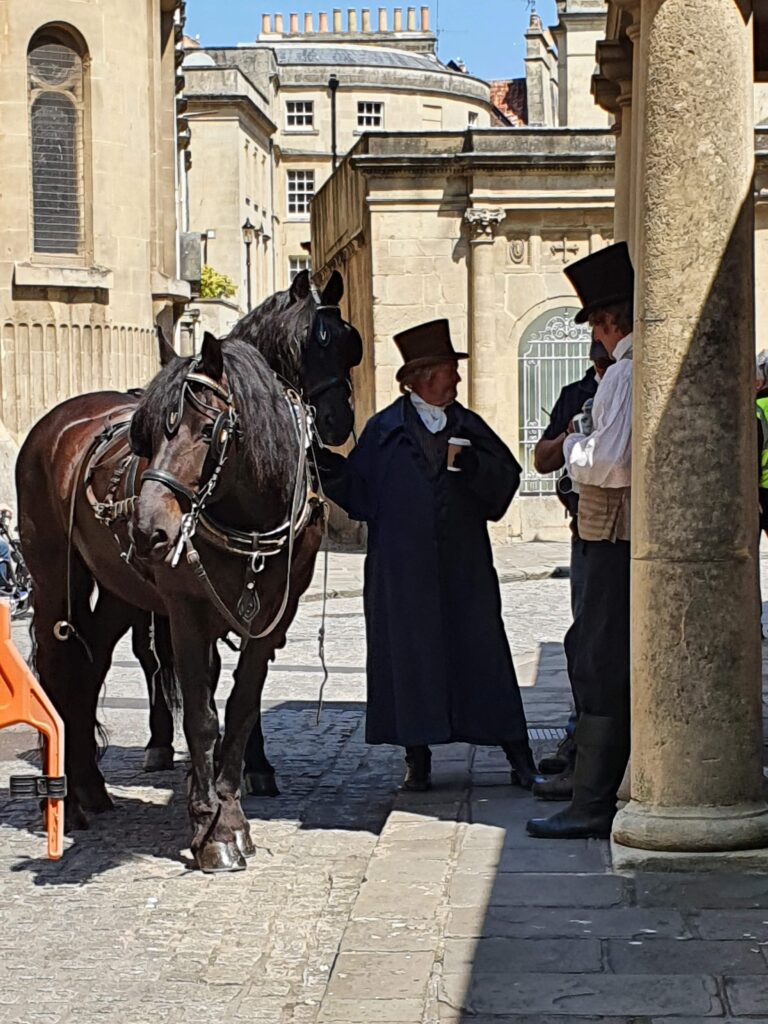 Horses waiting on the streets of Bath, just like in days gone by 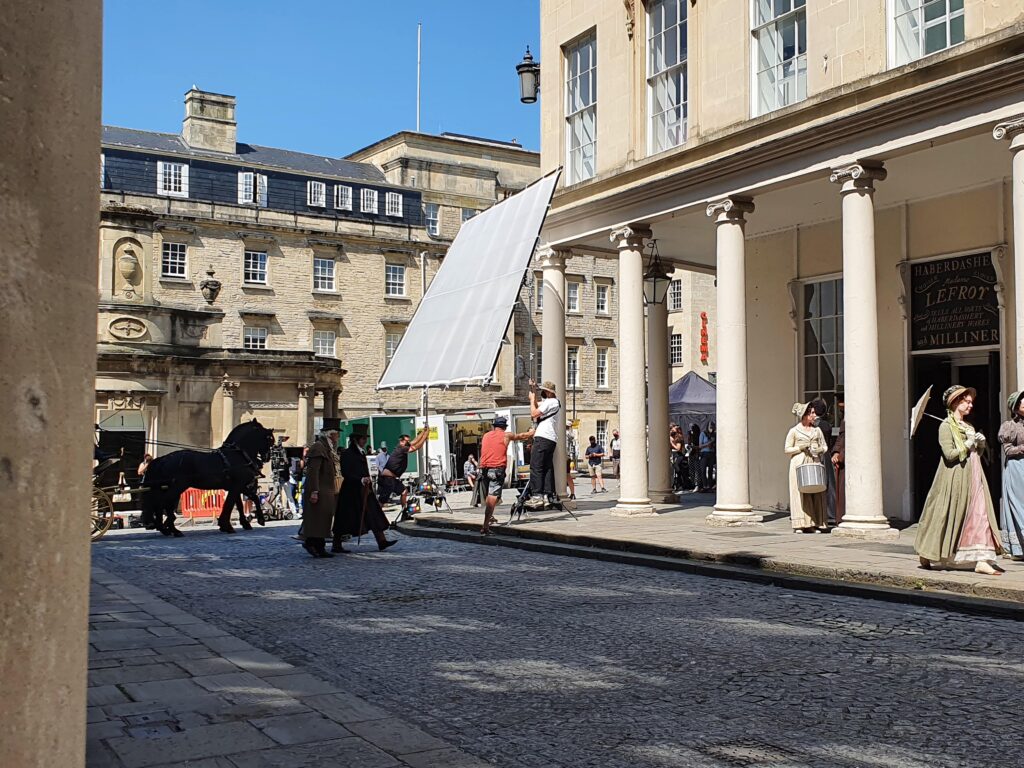 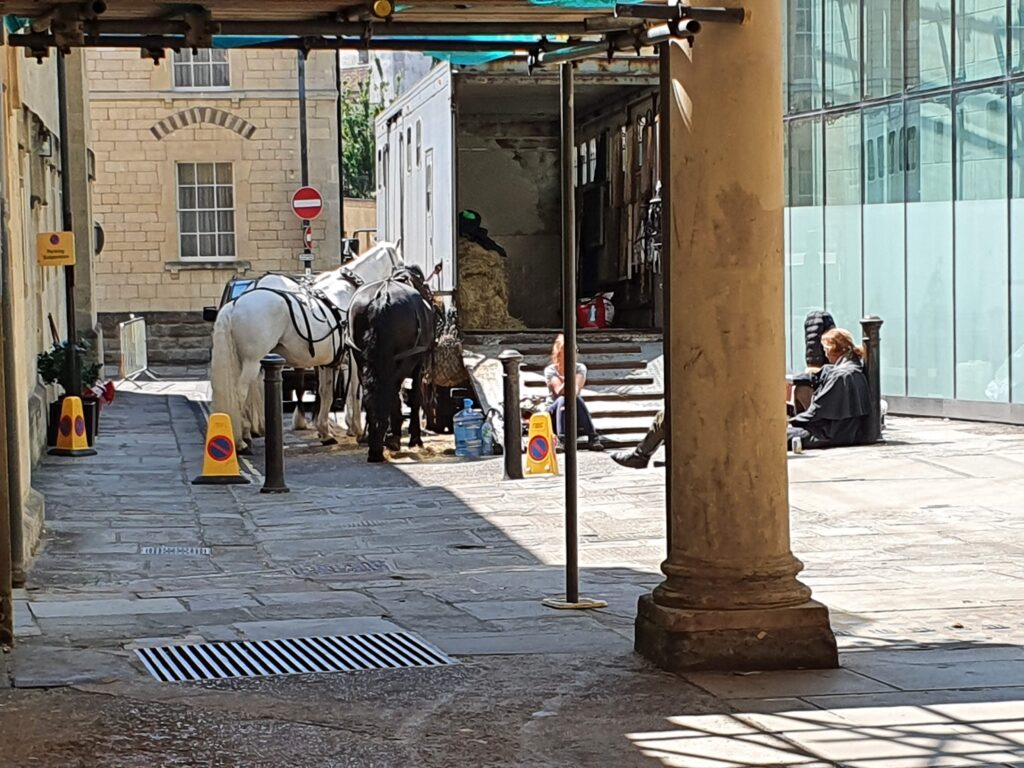 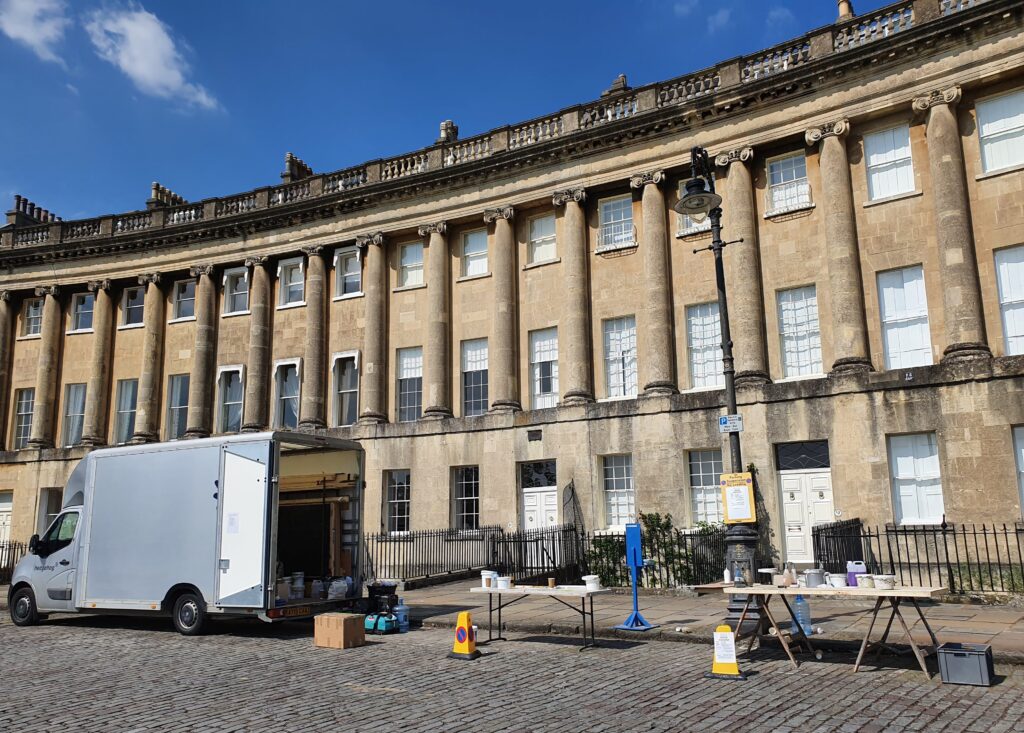 Preparing the Royal Crescent for filming 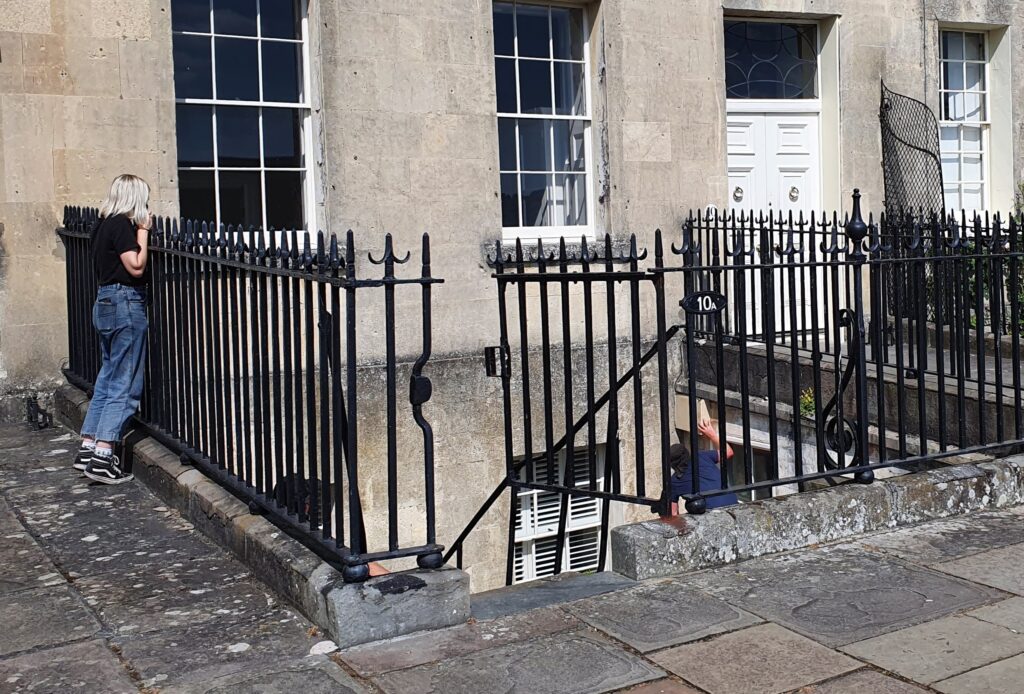